Graffiti scratched into a toilet paper dispenser in the men’s washroom in L section at North campus reads, “Muslim = terrorism.” If that ugly anonymous message is a measure of a community’s feeling or its grasp of an issue, then there may exist a wide gap between Humber’s Islamic and non-Islamic communities.

“Generally as humans we understand that things aren’t black and white. When the media presents something as a black and white issue where it’s Muslims and terrorists and that’s it, the curiosity in us just naturally sparks,” he said.

More than one million Canadians identify themselves as Muslim according to the 2011 census but they didn’t have an official presence at Humber College until Taha Ali launched the Muslim Students Association in October 2014.

Ali is a student in Justice Studies at University of Guelph-Humber.

His goal wasn’t just to create a sense of community for a group that was facing increased prejudice, but also to spread awareness about the Islam that exists outside of the media.

“The aim is to integrate the Muslim and the non-Muslim community together,” he said.

The rise of the Islamic State of Iraq and Syria (ISIS) however raised a lot of questions about who Muslims are, what their religion means, and whether Islam truly condones the horrific acts of violence that ISIS claims.

Sharia law – the extreme customs enforced by Islamic states and the Islamic State of Iraq and Syria (ISIS) – is based largely on the writings of the Hadith, which is a compilation of oral reports published centuries after the Qur’an.

Dr. Shabir Ally, a religious studies scholar, said on his television program Let the Qur’an Speak on Aug. 26, 2014, that there may be evidence that the reports were written by politicians who wanted to justify their wars with false accounts of the Prophet Muhammad.

In Sharia law, these writings are second only to the Qur’an.

Taha Ali said when it comes to the Qur’an, the difference between mainstream Islam and extremist Islam is an “issue of context.” Extremists will isolate a verse to distort its meaning.

“They’ll use a verse in the Quran that says ‘kill them wherever you find them’ (2:191), but they’ll forget the verse that came right before it. The question arises: who is ‘them’? (Killing) can only be a defensive stance,” Taha Ali said.

Hayat Chowdhury, president of the Toronto Islamic Centre, said when it comes to violence and other digressions from Islam, a blurring of religious and cultural norms can cause it.

“Sometimes even when they come to this country they also apply those things,” he said.

As a member of the MSA Humber, students can learn Arabic, learn more about the Qur’an, and learn about Islam in general.

Many of the members who attend the Arabic and Qur’an classes that Taha Ali organizes are attended by non-Muslim students.

“The media says the Qur’an is a bad book, a Muslim is a bad guy, Islam is a bad religion,” he said.

Chowdhury’s centre downtown is full of free books, pamphlets and DVDs with titles like “Status of Women in Islam” and “What Does Islam Say About Terrorism?” to set the record straight.

It is possible this criticism might be because most Muslims won’t say outright that extremists aren’t “true” Muslims. Taha Ali said this is because Islam won’t allow fellow Muslims to judge a peer’s intentions, only his actions.

“One thing that Muslims do take seriously is the act of excommunicating somebody. If somebody says they’re Muslim, then as far as we know, they are Muslim. It’s not for us to judge whether their intentions are correct or not correct,” he said.

Chowdhury said this rule is to allow digressions from the Muslim rituals such as praying and fasting without being criticized by the Islamic community.

“Because of weakness sometimes we fall behind. But still we are Muslim,” he said.

When it comes to North Americans converting to Islam and immediately joining extremist groups like ISIS, Taha Ali said they likely haven’t taken the time to educate themselves about Islam.

“These people aren’t inside the mosques and that’s the problem. They watch a YouTube video and they go off and they do something by themselves. They’re acting in the name of the community without actually being part of the community,” he said. 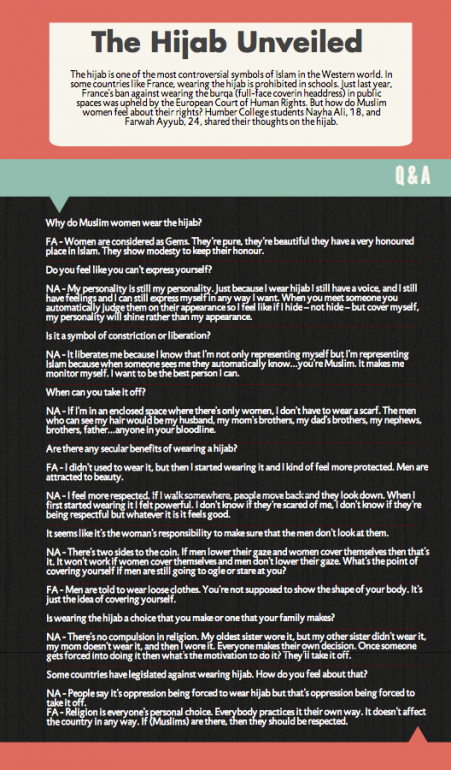